Budimo: The tale of a tree and Bishop Hannington’s remains. 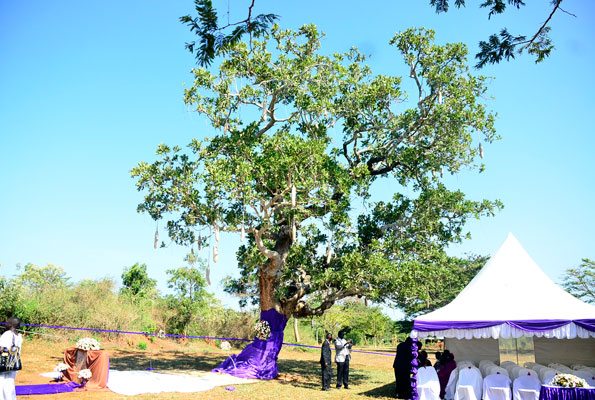 Historic: From the naked eye, it is just like any other ordinary thicket with thorny trees. Around its edge is a moat with two drawbridges on the extreme ends. A few meters away stands the Omutaabi tree believed to be more than 200 years old, which played host to the remains of Bishop Hannington for four days in Budimo village in Busia District.

The thicket (Omutaabi tree) was once a fortress to the Badimo people, who were forced away from their home because of sleeping sickness around 1870. Some moved to Kenya and settled at present day Kadimo, while others migrated to present day Namayingo District.
Seventy one-year-old Duncan Wandera Egondi is a grandson of the Banyideti, who co-occupied the fortress left by the Badimo with chief Gulyali’s people, the Balyali. “By the time the Banyideti came here, the Balyali had already settled here.

The fortress was surrounded with a moat, which was a form of defence against intruders. There was only one entrance for each clan. The Balyali and Banyudeti had separate entrances.”
Wandera explains what has been passed down to him by his father. “Two men, Ochola and Osore, came carrying the remains of Bishop James Hannington, an Anglican missionary, from Kyando [present day Mayuge District], where he had been killed on their way to the coast. But according to their culture at the time, a body of a foreigner could not be allowed into the fortress. The two men were allowed to stay outside the fortress and rest as long as they wished. It was from there that they got their food and water.
They put the body, which was tied in banana fibres, in a tree to keep it away from hyenas and made a bonfire at night to keep warm and keep the wild animals away,” says Wandera. The Omutaabi tree (Thicket), now named Hannington tree where ’s body is said to have been hosted for four days in Budimo village in Busia District.

After four days of rest, the two men wanted to carry on with their journey and again culture demanded that they could not go away without the land being cleansed. “The Balyali asked my grandfather, Mason Aguru, a Munyideti, to give Osore and Ochola a white bull and a white sheep as a sign of cleansing the land. I was told the reason they gave them white animals was because they were carrying a white man’s body,” Wandera recalls.

Memories
“Over there,” Wandera says, pointing to the spot where the memorial stone stands, “is where the first church was.” The residents started a church in the area in memory of the killed bishop. Moving a few meters away, he recalls the exact location of the school, Budimo Sub-grade School, which he attended. “Both the school and the church were made of grass from the ground to the roof. Very often termites would attack the structures and eat them down. After the collapse of the church in the late 1950s, a new one was built where the current one stands today,” says Wandera.

Duncan Wandera Egondi showing the boundaries of the shrine.

The school Wandera went to had only two classes. After Primary Two, the pupils had to go either to the main primary schools, which, according to Wandera, were not in the area then, or end their education.
“I do believe and I know my age mates would agree with me that the coming of the Bishop’s body to Budimo gave birth to Christianity. Short of that, the religion would have taken much longer to reach here,” Wandera recounts.
According to Wandera, the courage shown by the two men who carried the bishop’s body, brought fame to the area. The fame did not come as a result of the body staying here but what it brought with - Christianity. Early Christians from this area became very prominent people. Some those include the late Awori, father of former minister Aggrey Awori.
He was the first person in the whole area to become a canon and he went on to spread the gospel to Kenya.
Proud Banyideti. 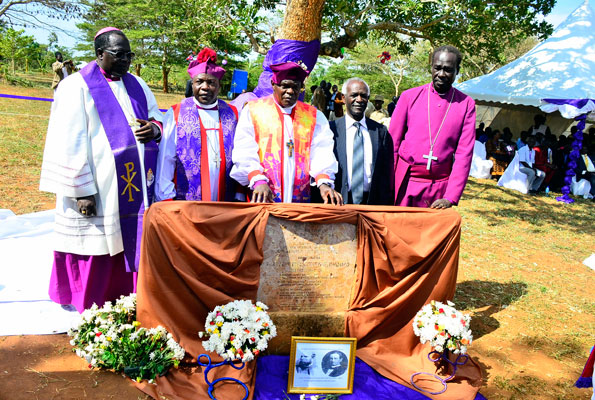 L-R: Archbishop Emmanuel Obbo of Tororo Archdiocese, Bishop Simon Bogere Egesa of Bukedi Diocese, Archbishop of York John Sentamu, Justice James Ogoola, the chairperson of the Uganda        Judicial Commission, and Bishop Emeritus Nikodemus Okille of Bukedi Diocese, behind the Hannington memorial plaque in Budimo, Busia District on Wednesday during the commemoration of Bishop Hannington and the 48 martyrs who died with him.

Ever since the Archbishop of Canterbury, Dr George Carey [now retired], declared the place a shrine in 1998, there have been annual services held on the ground.
“I have been coming here every year since 1998 when it was declared a shrine. I am proud that my grandfather did what he did. And whenever I see people coming here to remember that servant of God, I feel proud of what my clan did,” Seventy one-year-old Duncan Wandera Egondi, a grandson of the Banyideti, says.